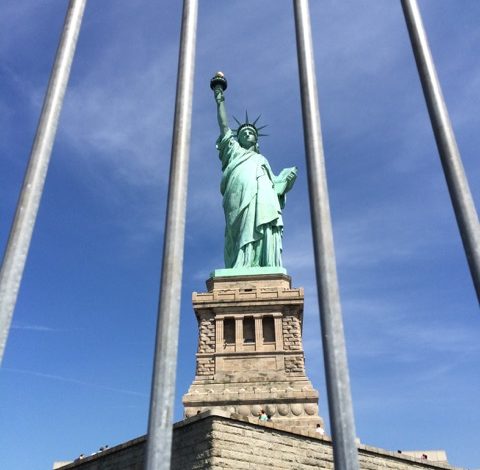 WARNING: Long rant here. You may want to pack a lunch, if you’re not too nauseated by the bucking bronco ride that was the campaign season and its horrifying results…

Here we are nearly two weeks after the election. I’m not sure which stage of grief I’m in. This uneasy feeling is so unprecedented that Elisabeth Kübler-Ross’s sequential stages of grieving have melded together. I flit between being angry depression, depressed denial and bargaining acceptance.

On the one hand is a clenched fist, middle finger extended; the other hand is extended in the seemingly distant hope of reaching out and forging ahead. At times I’ve thrown both hands in the air, alternating between WTF? and WhaTiF?

Yet, I’m a hopeful pragmatist who strives to be fair and open-minded, someone who prides himself on being able to empathize with most people and who works to see the world from multiple perspectives. I often go out of my way to hear someone out and listen to their point of view. I want to give everyone the dignity they deserve as a fellow sentient, thinking human being. I strive to see multiple sides of an argument or an issue, to truly understand where someone is coming from and appreciate how earnestly they hold their beliefs. I am open to the possibility that I could be wrong, less than fully informed on an issue. If convinced of my mistaken perspective, I will admit it and adapt my opinion. I respond best and make lasting change when someone’s thoughts are well-formed and based in fact, but I also realize that people often just feel certain ways that they “know” to be true. We can all be moved when something strikes a chord buried deep inside that we often don’t hear.

This Election highlighted the real, deep-seeded problems with the very foundation of our republic and the principles upon which it was founded and has evolved, imperfectly as it’s been. Trump is a symptom and master-exacerbater of these problems, but not its cause. To his credit, he recognized these problems and seized upon explanations for their causes that made sense to people who feel so beaten down that they were willing to accept assertions based on lies, faulty logic, and demonization of others presumed to be responsible for all their problems. Trump played to the animalistic gut-feel part of the brain, not the rational part and certainly not the moral part.

Emotion is always the foundation for how big arguments are won. It’s largely why Barack Obama earned the Democratic nomination over Hillary Clinton in 2008. But where Obama’s message was filled with hope, Trump’s message was filled with fear and dread. Fear is a powerful motivator, especially when the picture painted is dreadful. Directing blame on others over-simplifies things. It exculpates oneself entirely and ignores evolving realities that fly in the face of what one “knows” to be true. But being open-minded can be hard when you feel that your world is closed-off.

I understand the anger that many people feel about the direction of the country. I, too, have been disheartened by the neglect of the middle class and people suffering in poverty, while the wealthy have grown wealthier and largely callous to those not benefitting from the overall macro-economic growth and prosperity. Both Sanders and Trump talked about this imbalance, and their messages resonated with millions. I recognize and sympathize with people who once had jobs with which they could sustain their families and promise a future in which their children could thrive by working hard and playing by the rules.

I grew up in the 70s and 80s in Rochester, N.Y., a city steeped in solid family-centered values, home to some of the world’s greatest manufacturers: Kodak, Xerox and Bausch & Lomb. It is city with a proud history of civil rights milestones that included the struggles of Frederick Douglass and Susan B. Anthony, a thriving arts community, top-notch education and world-class healthcare. But the city was shuttered in the late 80s and 90s by the manufacturing and technological revolutions that corporate management either failed to recognize or to which it turned a blind eye, as greed, selfishness and short-sightedness clouded the pursuit of sensible long-term growth that would have benefited not only shareholders but also employees and the community. My father was a victim of this seismic jolt, forced to take retirement at age 50, after 25 years with the company, promised a lifetime of benefits that have been whittled away in the intervening 25 years.

My father’s story is no different from that of millions of other people over the past quarter-century. One’s sense of self-worth is largely intertwined with one’s work. Most of us don’t want a handout. We simply want to get our hands dirty (or, for germaphobes, use them otherwise for productive ends) in order to provide for our families. Though some elites may dismiss it, there is nobility in creating something with one’s hands, and such opportunities should be accessible to anyone willing to learn the skills necessary to perform the tasks that the job requires, whatever that job may be.

The mismatch between people’s desire to work for compensation commensurate with their abilities and companies’ insufficient investment in their futures is not new. The problems of this misalignment have been brewing for well over a generation. Politicians blow hot air to their individual constituents while being blown by special interests, as they’ve provided tax breaks to the wealthy on disproven hope that benefits will trickle down. Most of what actually trickles down is urea. Rather than holding people responsible for playing chicken with the economy, today’s robber-barons get off scot-free, one hand slapped while the other reaches deeper into our pockets.

Rarely does the benefit inure to the communities that need the most help to get them back on their feet. Our “representatives” try to assuage us with raw-meat prattle about “what the American people want” that merely identifies problems but rarely deals honestly with them or their underlying causes. So many of our gerrymandered, I mean, elected officials have lost touch with what truly makes America great: the fabric of strong families of all backgrounds interwoven with values of hard work and fairness, a belief in the goodness of each other, and adherence to some version of the Golden Rule. But the stitching is coming apart; the fabric is fraying and is now riddled with holes.

Trump doesn’t play by the rules. He manipulates them for his own ends, everyone else be damned. He comports himself like an addled toddler or entitled adolescent, out only for himself because he thinks he deserves all the outward trappings of success by dint of his wealth, regardless of the hollow and sketchy ways it may have been amassed. He bullies everyone who disagrees with him to cover up his inadequacies, projecting his many faults on others, so insecure about himself that he plumes his feathers as a defense mechanism. (Our national bird will be downgraded from a bald eagle to a peacock with a really bad comb-over. (Is bad hair a requirement for demagogues? Hitler looked like he used Crisco as product; Kim Jung Un appears to be coiffed from baking molds.) Is it metaphorical that such unkempt hair covers a twisted mind? Ok, now I’m being petty, and it’s not pretty.)

Trump is like a donut-maker whose products are made with only (very) white flour, and are con-artistically designed and sleight-of-hand-crafted. They may taste great to some people, but they are terrible for you because they’re toxic. Most have holes in the middle, while others are filled with strychnine, snake oil and fecal matter, which he is so full of.

He has undermined the political system by paying lip service to America’s true problems without offering real solutions. He spews venom and tramples on the Constitution the way he ramrods vendors. He is both the problem and the symptom of a greater problem with our democracy. He has brought to the public square from the realm of civil society to the brink of thuggery.

As FoxNews unwittingly demonstrated for years, it’s hard to be fair and balanced. And is that really what we as the citizens of a republic need? We’ve been lulled into this dangerous notion of moral equivalency, the naive view that everyone’s opinion has the same value, when facts are malleable and the potency of one’s views are judged by volume and vigor. While it is subjective to determine which opinions matter more, not every opinion should carry the same weight. Some people are more well-informed, more studied on certain issues—their opinions, founded in facts and logic, should hold more sway. Expertise matters. People who dedicate their lives to studying a certain subject deserve more air time than some wanks spouting off…but enough about the hosts of Fox and Friends.

Yes, I live in the bubble that is the San Francisco Bay Area. I am absolutely left of center as far as the whole country goes, but I’m probably right of center in the Bay Area. As open-minded as the region professes to be, sometimes people who truly believe themselves to be open-minded actually have their heads up their asses and (perhaps ironically) can’t see the shit that’s going on around them.

I’m not against the Right. I believe, as our Founding Fathers did, that the country thrives on vigorous debate. We need people on both sides of the aisle to argue their points and to concede (yes, concede…better to have conceded than to be conceited) when another argument is stronger.

Compromise is not a dirty word. It’s a hopeful one based on shared trust. It’s a mutual promise, an implied contract where both parties give a little to get a little. Pre-schoolers understand and act on this concept better than many of our Congresspeople.

I’ve been saying for years (privately, not publicly…the way Trump initially stated his opposition to the Iraq War in metaphorical pillow talk with his lackey Sean Hannity) that the ends of the political spectrum are bending around in a circle and are now touching, with the people on the Left and the people on the Right expressing the same concerns, namely feeling left out by the political elite and big-moneyed interests that shape public policy and attempt to mold public opinion.

The whole idea behind OTOHOTO is to look at the world from different perspectives, to let empathy drive how we relate to each other, to be open to understanding that another person may seem the same world that we see in a very different way than we do. Our varying experiences in the world undoubtedly shape how we perceive reality and how we discern patterns from deluge of ‘data’ available. You can disagree with someone’s opinion, but we have come to a point where we’re disagreeing with each other’s facts. Until we agree on the facts—and reputable sources thereof—I fear for our country.