Neologism of the Day

Neologisms are new words or expressions, often coined. In psychology, it’s often used to refer to new words coined by people with schizophrenia, where they mean something only to the coiner or, maybe they are a sign of genius, connecting words or ideas never connected before. One of my favorites was from Word Play Masters 2009: “ignoranus” (a person who’s both stupid and an asshole).

par•a•dox•en: (PAR-a-dox-en) pl.n. more than one paradox, just like how oxen is the plural of ox. (According to the Literary Devices website, the singular ‘paradox’ “comes from the Greek word ‘paradoxon’ that means ‘contrary to expectations, existing belief or perceived opinion.’ It is a statement that appears to be self-contradictory or silly but may include a latent truth. It is also used to illustrate an opinion or statement contrary to accepted traditional ideas. A paradox is often used to make a reader think over an idea in innovative way.) 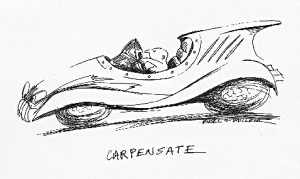 car•pen•sate: (KAR-pen-sate) v. To drive a flashy, often highly accessorized, sportscar in order to make up for having a small penis, esp. to make females think otherwise. [English, car, and compensate, to make up for]

fon•ti•fi•cate: (fon-TIF-e-kate) v. To get on your high horse about the merits of Helvetica over Times New Roman. [English, font, typeface, and pontificate, to preach]

pa•lin•drone: (PAY-lin-droan) n. The speaking style and “substance” of a former VP candidate, which makes the same non-sense frontwards and backwards. v. To speak with a palindrone to the point where it makes the listener want to be on the receiving end of a hunting rifle wielded by the person speaking [English, Palin, governor who gave many Americans heart failure by coming within 100 electoral votes of being a heartbeat of being President, and English, drone, to blather; also the preferred U.S. means of conducting warfare in 2014]

ass•hol•is•tic: (ASS-hole-IS-tic) adj. 1. of, pertaining to or demonstrating signs of being an asshole. 2. Smugly presenting oneself as better than anyone else because of the holistic way in which they lead their lives (at least as far as the outside world knows) [English, asshole, everyone knows one when they see one]